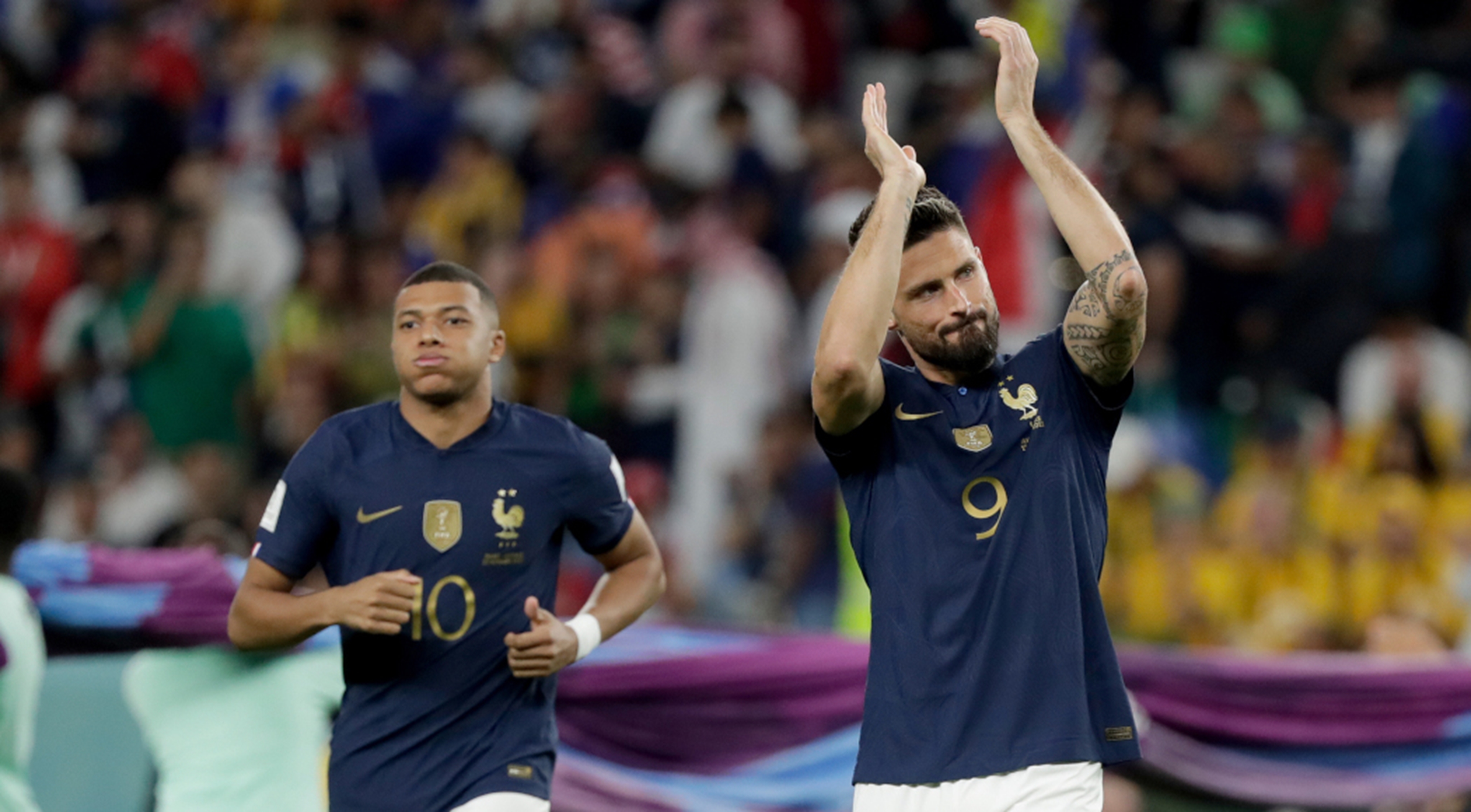 The two European heavyweights, separated by just 20 miles (32 kilometres) of ocean, have surprisingly met just twice on the biggest stage, but not since 1982.

France, crowned world champions for the second time in Russia in 2018, eased past Poland in the last 16, with two goals from Paris Saint-Germain forward Mbappe and one from Olivier Giroud.

England beat Senegal 3-0, turning on the style for an ultimately comfortable win against the African champions after a shaky start.

Mbappe, 23, is the Qatar tournament's top scorer, with five goals in just four starts, while Giroud's strike against Poland made him France's all-time leading goalscorer.

Questions about how England will keep the deadly Mbappe quiet have dominated the build-up to the match, which takes place in the desert setting of Al-Bayt Stadium.

England's pacy right-back Kyle Walker, likely to have the task of shackling Mbappe on Saturday, is anxious to avoid the impression that the fleet-footed attacker is the only threat.

"I know he's a top player but we're not playing tennis. It's not a solo sport, it's a team game," said the Manchester City defender.

"We know he's a great player and that's why he's the focus of all questions. But let's not forget (Olivier) Giroud, who has scored countless (goals), and (Ousmane) Dembele, for me just as good on the other wing."

The France midfield has coped well in the absence of the injured N'Golo Kante and Paul Pogba, with Antoine Griezmann impressing, but if there is a potential weakness in Didier Deschamps' line-up it could be in the full-back positions.

Jules Kounde and Theo Hernandez will face a tough test against whoever they face, with Marcus Rashford, Phil Foden, Bukayo Saka, Jack Grealish and Raheem Sterling all in the mix.

That wealth of attacking options means England will also have enviable game-changing options on the bench.

"England are a team with similar characteristics to us, really quick players out wide, attacking full-backs and midfielders who like to get forward," he said.

"But I am not sure we need to say that we have to be wary of them. They will also be very wary because we can cause them problems."

Southgate is in a tricky position. Does he stick or twist? Does he let his young attackers off the leash or bolster his defensive options?

The England coach came under fire in the build-up to the World Cup after a miserable winless run even though he has credit in the bank from reaching the semifinals in 2018 and the final of last year's Euro 2020.

England are joint top scorers in Qatar heading into the quarterfinals, with 12 goals from their four games.

Their standout player has been marauding teenager Jude Bellingham, who has formed an impressive partnership alongside the more defensive-minded Declan Rice.

Like France, England's potential weakness is at the back, with central defender Harry Maguire vulnerable to pace.

Southgate said the match was the "biggest test we could face".

"They are world champions, with an incredible depth of talent and outstanding players. They are very hard to play against and score goals against," he said.

"It's a fantastic challenge. It's a historic rivalry with great games from the past. It's a brilliant game for us to be involved in and test ourselves against the very best."