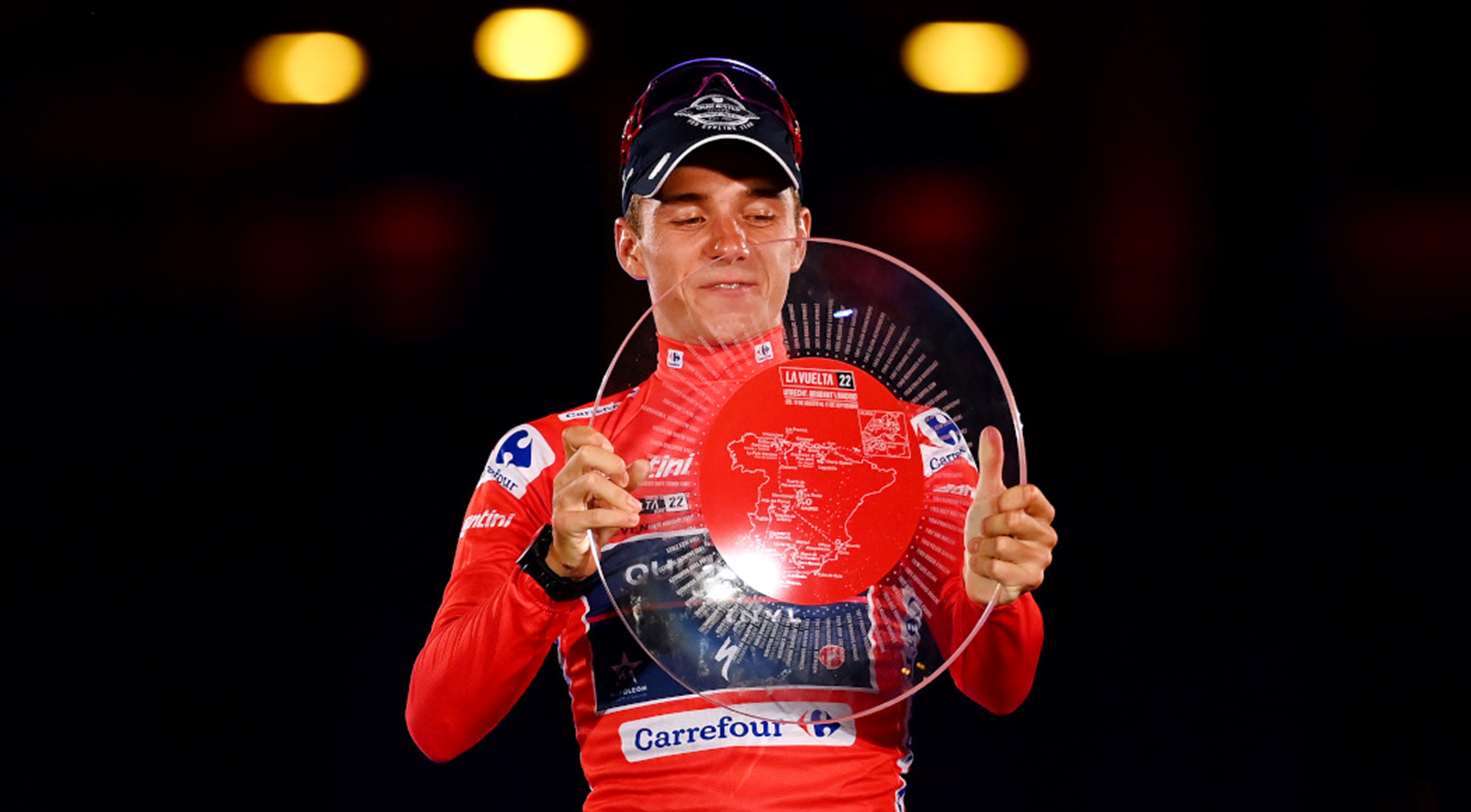 Belgian cyclist Remco Evenepoel's crushing triumph at the Vuelta a Espana on Sunday saw the 22-year-old finally deliver on his early promise five seasons after his breakout year.

"He took his time in the end," said his Quick Step boss Patrick Lefevere.

Never one to shy away from the spotlight, Evenepoel's celebration of his double junior world championships triumph at Innsbruck in 2018 demonstrated the level of his self-confidence.

Having trounced the opposition he cruised towards the finish line stood on one pedal, hopped off, hoisted the bike aloft and crossed the finish line on foot urging the crowd to cheer him.

A BOY AMONG MEN

It wasn't much different at this year's Vuelta, the consistent overpowering, the gulf in class and the swagger.

Evenepoel was born in January 2000 into a cycling family in Aalst in the Flanders region.

"We hardly had his stabilisers off for a month and he was keeping up with us," his grandfather recalled of a 50km cycling excursion with a five-year-old Evenepoel.

Despite the fact his father rode for four years as a professional cyclist, young Remco favoured football.

He was on the books at his beloved Anderlecht and then PSV Eindhoven in the Netherlands and played for Belgium at under-16 level.

"His powers of endurance were beyond the pale," his national coach from the time said.

"He had a massive personality. We made him captain straight away," said Anderlecht under-16s coach Stephane Stassin.

The general description was that he played like a man among boys and many are the anecdotes about him running half-marathons with Kenyans on the eve of matches.

Evenepoel would later say he was distraught when Anderlecht released him, but he did not dwell on it for too long.

Barely a year later he was double world cycling champion, winning the time-trial and road race, and had a contract with Belgian cycling giant Quick Step.

There was immediately talk of the new Eddy Merckx, which he brushed aside.

"I don't want to be called the new Merckx. I'm the new me," insisted Evenepoel.

The victories came thick and fast and he won four stage races in 2020 before his life suddenly flashed before his eyes.

At the Tour of Lombardy in August 2020 Evenepoel looked set to win but instead he took a corner rashly, hit a bridge and plunged head over heels into a ravine, falling 10 metres, breaking his pelvis and puncturing a lung.

"That fall took a year out of his career," said Lefevere.

By the 2022 season when Evenepoel was not selected for the Giro d'Italia or the Tour de France eyebrows were raised.

But a landmark triumph at Liege-Bastogne-Liege, where Tom Boonen said Evenepoel had ridden everyone into the ground, gave hope.

He won every stage race he entered in 2022 and arrived at the Vuelta with a chaperone whose personality perhaps mirrors his own in the form of the swashbuckling world champion Julian Alaphilippe.

Alaphilippe's job appeared to be to curb the younger man's excesses through a mountainous first week.

Evenepoel emerged from a foggy Asturian mountain finish in the leader's red jersey, and pulverised the opposition in a long time-trial at Valencia.

Key rival Primoz Roglic then took a gamble trying to close the gap and crashed out - leaving Evenepoel to cruise towards Madrid and his first Grand Tour title.

"It's for my parents, my fiancee, my teammates," he said.

"It's the result of many weeks and months of hard work and sacrifices and always believing in yourself. It wasn't easy, I had some stiff opposition, but I did it and I can't tell you how much this means for me."